To celebrate International Men’s Day on 19th November, we spoke to 3 amazing men who are currently following an exante diet plan. They share how they got started, the changes they’ve noticed since starting exante and some top tips to help keep you motivated!

Meet John who has lost over 4 stone 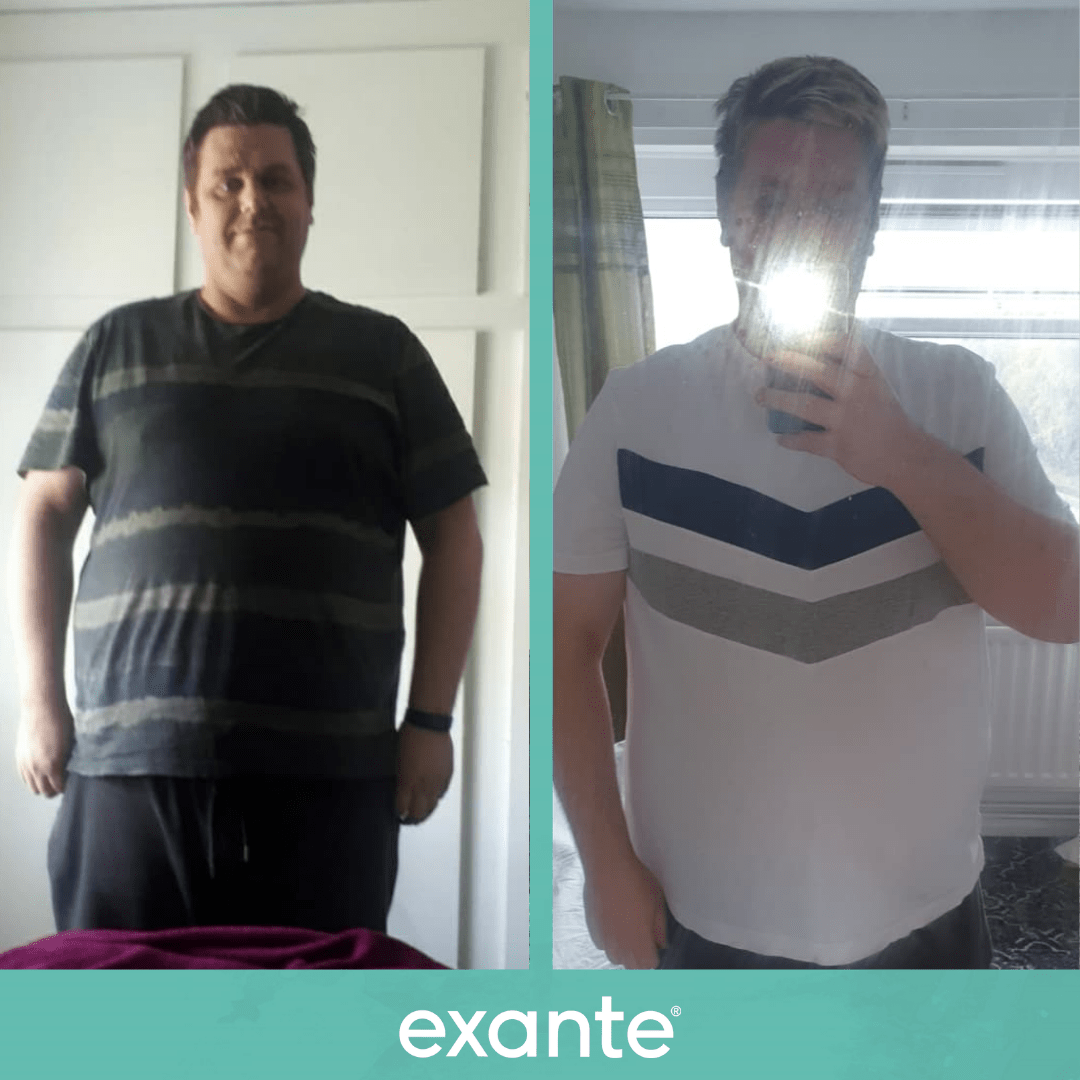 Why did you decide to start exante?

“I was really suffering with ill health and depression because I was the heaviest I had ever been. I have always been ‘the overweight one’ since I was a kid. I was eating chocolate everyday and the bars got bigger and bigger. I was also working nights so to keep me awake during the night I was drinking 2 litres of Coca Cola a day- sometimes more.”

“I avoided the scales as I weighed myself and I had reached 25 stone. I was so ashamed and my health was not good. I was hospitalised twice and had pain in my knees and hips. I felt sluggish and sleepy all the time.”

“My brother had started on exante. He was already in shape but carrying a few extra pounds and he managed to lose 3 stone. He said to me to try it, but I was very hesitant even though I knew I could not carry on how I was as there was only one place I was heading.”

How has exante impacted your life?

“I tried exante and thought I would never be able to stick to the diet, but in my first week I lost 9 pounds! That gave me the boost I needed and I have now been doing exante for 17 weeks. I have lost 4 stone and have noticed that my hips feel better. I can actually run a little now, I do a combat class and I’m feeling more alive.”

“I am feeling more alive. I have had my bad weeks and struggled to get back on target but I just remember how I was feeling before and that motivates me.”

What advice do you have for other people considering exante?

“I would advise anyone to give exante a go, by far the best diet I have ever done and I have tried them all! Slimming World, Weight Watchers, Cambridge Diet but exante has managed to change the way I think about food.”

Tommy who has lost over 2 stone 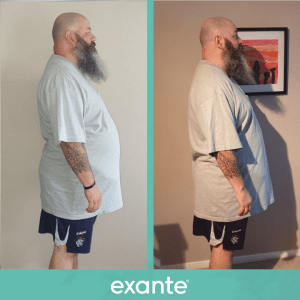 Why did you decide to start exante?

“I was fairly active in my youth, playing football, rugby and badminton, but that all stopped when I got older and started working. I was finding that I couldn’t be bothered taking part in any sports after a days work.”

“I ended up just drinking and eating takeaways with friends, rather than staying active. So inevitably, the weight began to creep on, then it just piled on and before I knew it I was way overweight for my age.”

“I became lazy, and didn’t do anything about it. So I’ve been overweight for all of my adult life…something I don’t take any pride in. I had enough of not being able to find clothes that would fit me, or when I did they wouldn’t sit right on me.”

“I got fed up of not being able to interact with my son as much as I wanted to, without feeling tired and out of breath. Then a friend of mine started the exante 800 plan. He started to see results fairly quickly, then one day posted his before and after pictures. I was astounded!”

“I asked him about the diet he was on and he told me all about it. I weighed myself and came in at 22st 2.8lbs! I was so ashamed of myself that I’d let myself balloon up to that weight. I had said this loads of times before, but this time I HAD to do something about it.”

“I thought what did I have to lose, other than weight?”

How did you get started?

“I ordered the 2 Week Diet Plan and got started on it straight away. Day 1 was a struggle, as was day 2 and 3… but after that? It got easier.”

“Then came my 1st week weigh in, I wasn’t particularly looking forward to it… but to my amazement I had dropped 9.2lbs! I actually struggled to believe it! I even changed the battery in the scales as I thought there was something wrong with them! Week 2 weigh in, a further 4.2lbs. Week 3, I dropped 2.9lbs and passed the 1 stone mark! I was stunned.”

How is your exante journey going?

“Since then, I have continued to lose weight and have now dropped 2st 8.5lbs. I am getting into smaller t shirts and jeans now! I now order the 100 products for £99 deal. I split the order between shakes and bars.”

“I have also joined the exante Diet Official Facebook Group, where everyone has been so supportive. Even if you post that you have lost 1lb, everyone jumps on to heap praise on you and say well done. Or if you post that you have maintained or even put on weight, people are so quick to post comments to help keep your spirits up and boost your confidence. It is an awesome page full of equally awesome folk.”

“My target was to drop 5st for Christmas, but I don’t think I’ll hit that so I’ve extended the goal date for my birthday in March 2021.”

“The exante 800 plan has and is continuing to change my life for the better. I will continue on my journey until I reach my target weight of 17 stone and will re-evaluate where I go from there.”

Allan who has lost over 3 stone 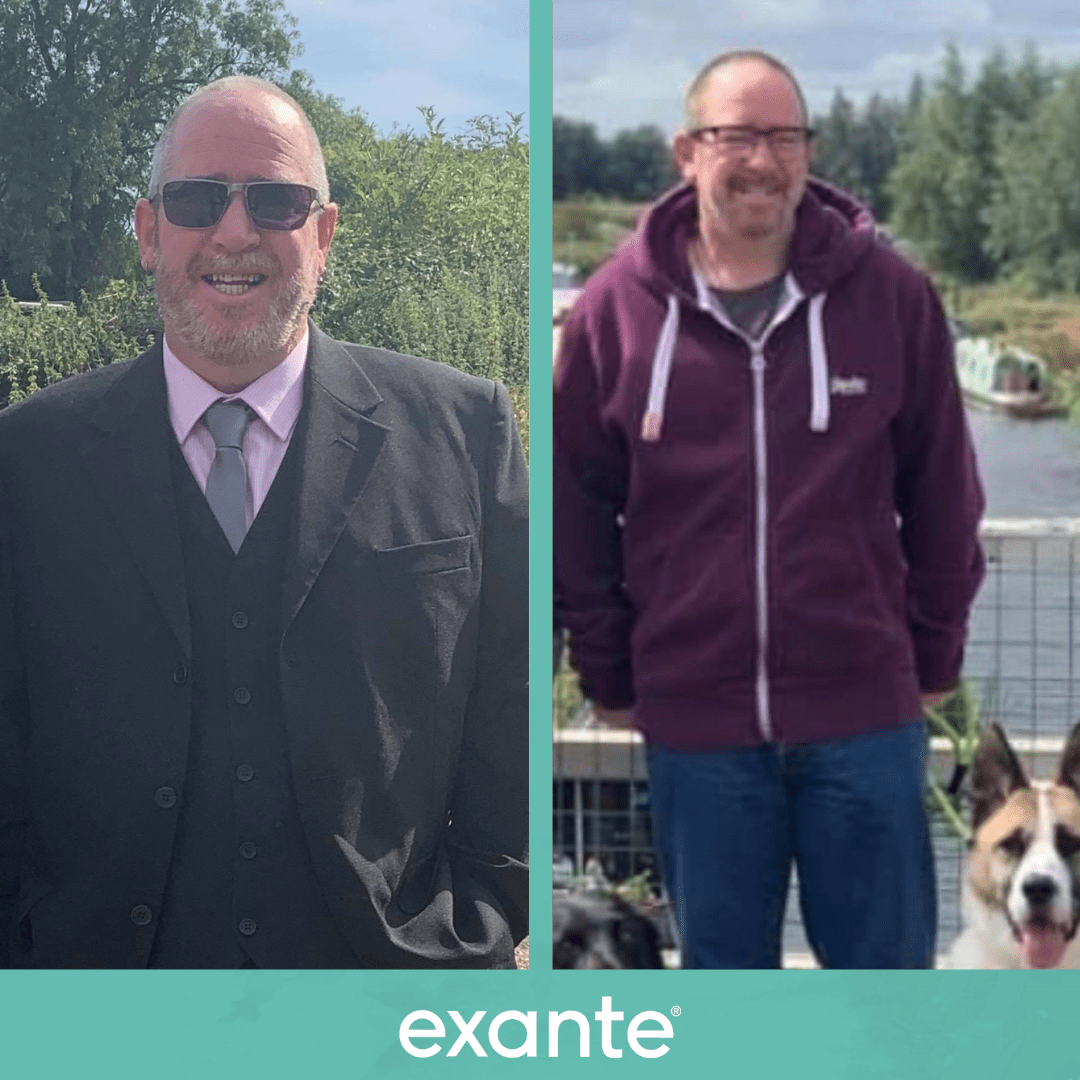 Why did you start exante?

“I topped the scales at just over 16 stone, which is a lot because I’m only 5ft7”. I had a large tummy and neck and though I must do something about this. I’m a lorry driver so I spend a lot of time sitting. I didn’t have a beer belly, I had a food belly and I just got to the point where I thought it was really time to change. That was the biggest part of me and the part which I hated.”

How is your exante journey going?

“I found exante on Facebook 6 months ago and it’s been a great, great experience for me. I’ve tried loads of different diets in the past and I’ve never stuck to any of them. Along with my better half, we decided to do exante together. We haven’t stuck to it 100% everyday. We have had the odd day off here and there but the key is… slow and steady wins the race!

“I found exante to be brilliant in everyway. There’s so many different shakes and bars to suit different tastes. The exante diet Official Facebook Group  is fantastic, full of people who are all there to help you and advise you and egg you on! I’ve been in that group since March.”

What tips do you have for other people following an exante plan?

“Don’t give up. It will pay off in the end! Remember to check your measurements because the scales don’t always move but the inches do!”

“Don’t beat yourself up when you mess up because you will, just put it in the naughty bucket. Tomorrow is a new day! Also make sure you drink lots of water and remember willpower is required to get past the hungry and tired stage, but it’s worth it!”

“Men, you have got to do this! You’ll see the inches come off just like I have. I’m glad I’ve done it, I’m glad I found it and I’m glad I’ve stuck to it.”

Feeling inspired? Get started today by ordering a 2 Week or 4 Week Boxed Diet Plan. It contains some of our best selling products and is the perfect introduction to exante! You won’t regret it!

Megan is a Marketing student at the University of Liverpool. She enjoys travelling, skiing and long walks with her two golden retrievers, Henry and Chester. As a former lifeguard and swimming teacher, Megan loves being in and on the water and has recently started learning to sail and wakeboard. When on dry land, she keeps fit by working out at the gym and is a regular at salsa and yoga classes.

Snacking Just Got Even Better: Introducing our NEW Snack Shots

Meet the newest of exante plan! Introducing the Maintenance Plan…