Yes, it’s that time of year again, the dreaded January. Although January already feels as though it has already run its course, we’re only two-and-a-bit weeks into it, how crazy is that? More than that, we’re now rapidly hurtling towards the dreaded Blue Monday. 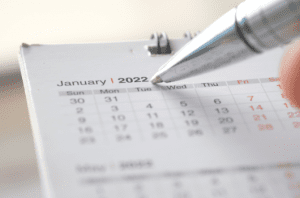 For anyone who doesn’t know, Blue Monday has been nationally declared as the most depressing day of the calendar year. But just because it’s the third Monday before payday, it doesn’t mean everything needs to be miserable! In today’s blog we’re unpicking what makes this Monday so bad and how, like us, you can combat succumbing to the blues then and throughout the remainder January.

Struggling to stay positive this January? Check out our tips for staying on track for 2022 in the blog below

Beat the January Blues: How we’re helping you get through January

What is Blue Monday?

Blue Monday falls upon the third Monday of January every single year. This is always exceptionally difficult because most of us get an early payday for Christmas, technically making it feel more like the fifth Monday of the month! Blue Monday is said to be so tough because the weather is often very cold and grey, bank balances are looking rather empty and, generally, the mood is pretty low.

That being said, the ideology of the ‘blues’ in January doesn’t actually come from trusted scientific research.  The January Blues were initially created by Cliff Arnall who was hired as part of a PR stunt promoting winter holidays by Sky Travel back in 2004 (1). Cliff came up with a calculation to support the third Monday of every January as the most depressing day of the year, he worked this out due to several reasons, including:

Why are we telling you this? We suppose it might be comforting to know that, as bad as Blue Monday seems, there isn’t any real correlation between the day and feeling blue. Yes, it may not be the nicest Monday you’ll have, but there are plenty of things you can do to turn it around…

So, here are exante’s top tips to fighting the January Blues

Mind – is a charity providing information and support on mental health problems.

Megan is a Marketing student at the University of Liverpool. She enjoys travelling, skiing and long walks with her two golden retrievers, Henry and Chester. As a former lifeguard and swimming teacher, Megan loves being in and on the water and has recently started learning to sail and wakeboard. When on dry land, she keeps fit by working out at the gym and is a regular at salsa and yoga classes.

Our Wellness Tips & Tricks for Ending January on a High

5 Easy Ways to Get Moving this Christmas