Under Pressure: Meet the inspiring people who lowered their blood pressure with exante

It’s Know Your Numbers Week 2021 which is why we’re talking all things blood pressure and why it’s always important to know your numbers.

What actually is blood pressure?

It can be quite confusing to understand what blood pressure really is. If you weren’t sure already, blood pressure is a measure of force that your heart uses to pump the blood around your body (1).

What is the difference between good and bad blood pressure?

An ideal blood pressure is anywhere between 90/60mmHg to 120/80mmHg, but factors like eating unhealthily, smoking, drinking and lack of exercise can lead to an increase in blood pressure (1). High blood pressure increases your risk of stroke, heart failure and kidney disease (1), but it can easily be managed.

Today, we’re speaking to some of the people who have been able to turn their lives around and lower their blood pressure since starting their exante journey.

“Hi, my name is Allison, I’m 60 years old and was able to reduce my blood pressure on exante. Before I found exante, I weighed 18st,12oz and I was kept on medication to regulate my high blood pressure.

Throughout my life, I’ve tried lots of diets and nothing lasted, but when my son and my daughter in-law introduced me to exante, I was keen to try it out. I ordered my first two-week box to see how I’d get on and I totally loved it!

Around four weeks after I started exante, I was due to see my doctor for a six-month check on my blood pressure, to my surprise it came down to 111/70mmHg. My doctor honestly couldn’t believe the drop- so much so he actually checked it twice! I told him I was trying out the exante diet, he advised me to continue using it and even reduced some of my medications.

Later that day, I was getting my blood samples taken (I have type 2 diabetes) and another miracle happened- my blood sugars had dropped. They didn’t just drop a little bit, they dropped from 35.5 to 9-6, so my doctor took me off another one of my medications! I couldn’t believe it, after just 4 weeks on the diet, I’d already seen such a difference in my blood sugar and pressure.

My doctors couldn’t believe the drop- he actually checked my blood pressure twice!

I’m still on the exante diet now and my blood sugars have continued to drop. My current weight is 17st, 2oz and, after just 13 weeks, I’ve lost 20 inches combined from all over my body!”

Just like Allison, Hayley and her husband have both changed their lives with exante

“I had a stroke 9 years ago at just 46 years old and, sadly, the medication and inactivity caused me to gain weight. I tried over the last 9 years to lose weight, but the medication I take made it too difficult. My husband’s health, on the other hand, was always okay apart from high blood pressure. So, we continued with our lives as normal. 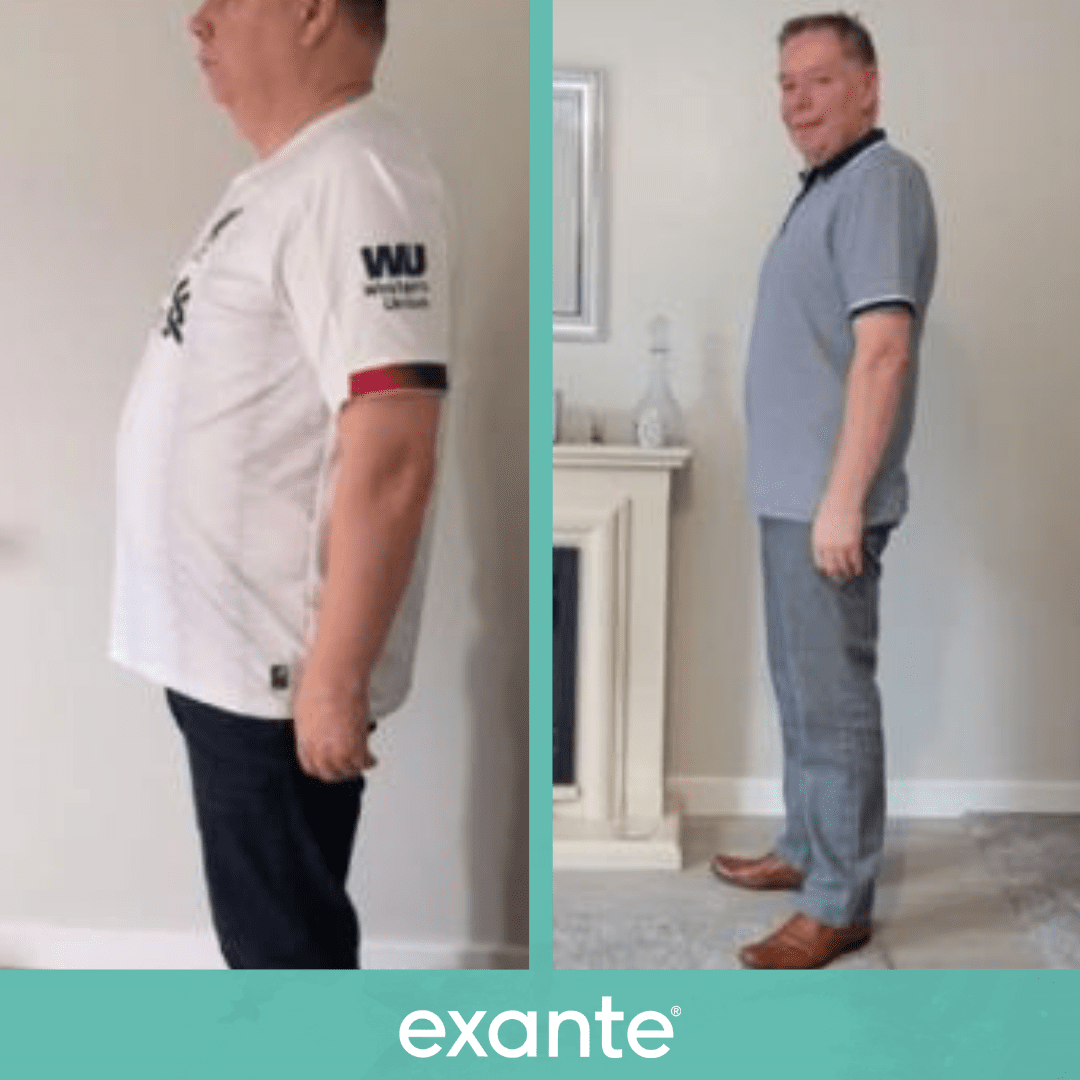 The moment I realised things needed to change for good was in March last year when my husband woke up during the night with serious pains in his chest- to say this was a wake-up call would be an understatement.

The next day I started researching diet plans and I stumbled across exante. I read lots of articles about how other people had had great results and saw that there was also a closed Facebook group for support. That day, I ordered our first shakes, and our journey began.

We started on the exante 800 plan with the hope of doing 12 weeks of 800 calories. Our anniversary was 13 weeks away, so we had something to look forward to and keep us going. We started off with 3 shakes a day and one 200-calorie meal. After about 4 weeks, we changed to 2 shakes and 400 calories. 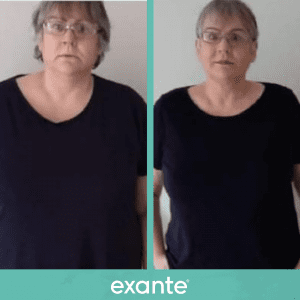 After just 13 weeks in, my husband had a little over 5 stone to lose until he hit his goal, and I had 7. We had a few days off when we went away for our anniversary, but the minute we returned we started again.

My husband is now just 2Ibs from his target weight and, thankfully, his blood pressure is back to a normal reading.”

“I first put on weight a few years ago and it’s been stable for a while, but still a bit too heavy. The real problems began when I was diagnosed with type 2 diabetes and my blood pressure suddenly spiked.

I was put on medication for my blood pressure to keep it stable; however, it continued to rise, so a second tablet was added and then, later, a third. At its highest, my blood pressure was 175/97mmHg, so I decided something in my life needed to change.

I started exante in July with the 800-calorie plan and so far, I’m down 14kg (about 30lbs). Thankfully, I’ve now stopped all my blood pressure medication and I’m comfortably below the recommended 120/80mmHg.

I struggled to get my blood pressure to this level even when I was on my medication, so the exante plan has been a real game changer for me. I’m so excited to see where my journey takes me next!”

How can I avoid high blood pressure?

There are some simple adjustments you can make to your everyday life to avoid having high blood pressure:

Say no to Salt

Avoiding processed foods that are rich in salt is a great way to keep in check with your blood pressure. Why not skip your Friday takeaway this week and test out our delicious Tofu and Aubergine curry?

Check out the recipe:

If you want to learn more about making tasty food without the high salt content, check out our blog below.

Step up your healthy eating game

If you are unhealthy or overweight your body must work harder to pump the blood to and from your heart (1).

Try out our tasty 4-week plan box for the ultimate kickstart to your healthy eating journey.

<
>
Want to stick to your 4 week plan? Try our subscription box, so you'll never miss a week

Cut out your coffee

Cutting down on caffeine is one of the best ways to keep your blood pressure looking good. We know- it’s hard to say bye to the daily coffee, but don’t worry, we’ve got a great alternative. 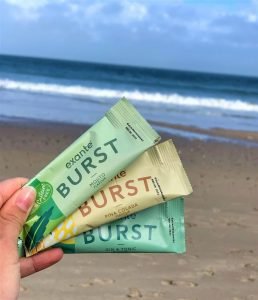 Our caffeine free BURST is a great way to get a fruity pick-me-up without feeling groggy from caffeine. It’s also filled with 27 vitamins and minerals and B12 for energy and focus (2).

If you’d like to find out more about Know Your Numbers Week visit the official page and find your nearest free blood pressure station.

2) Vitamin B12 contributes to the reduction of tiredness and fatigue.

Ketosis | What is it and Do You Need to be ‘in Ketosis’ to Lose Weight?